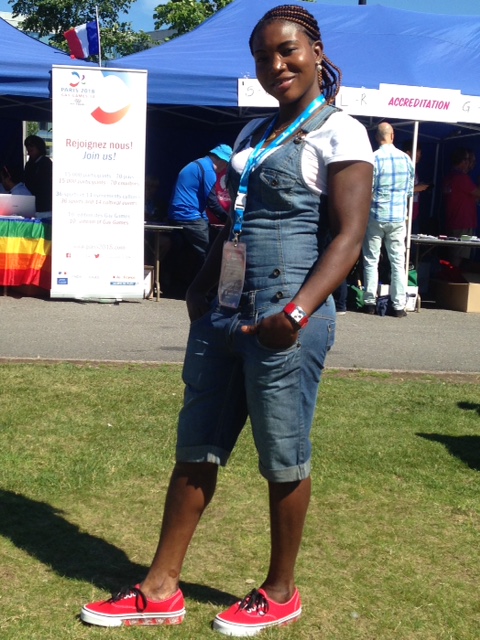 Born in Nigeria, Aiysat Yusuf-Aromire is a EuroGames 2016 participant in Helsinki, Finland - Europe. She has competed in 2 FIFA U-20 Women's World Cup tournaments in Canada 2002 and Thailand 2004, 1 FIFA Women's World Cup in China 2007 and the Women's Olympic Football Tournament Beijing 2008.  Ayisat is also a board member of FARE since 2015. Fair's website states "Fare’s commitment to tackle discrimination through football’s inclusive power is based on the principle that the game, as the most popular sport in the world, belongs to us all and can propel social cohesion. Fare combats all forms of discrimination,  including racism, far-right nationalism, sexism, trans- and homophobia and discrimination against disabled people."


What inspired you to participate in football?
What really inspired me to participate in football was when I was young I saw a lot of boys playing football in my community. From there I started playing football with them and at that time I used to be the only girl playing among boys. It was kind of funny and fun because I used to be the tomboy .
Fondest memory from the 2008 Summer Olympics?
My fondest memory from the 2008 summer Olympics was when I dined with some great athletes and celebrities like Lione Messi, Ronaldinho Gaucho , Kobe Bryant, The american great basket player Asafa Powell and many others.

What sports apparel item can you not live without?
Any Nike product + NIKE canvas shoes!
What is your favorite football shoe?
NIKE football shoes!
Fondest memory from the 2004 African Women's Championships?
After winning the Gold medals and we where flown straight to Abuja in Aso Rock to dine with the president of Nigeria.
Fondest memory from the 2007 Women's World Cup?
My teammates and I played 1-1 against USA's team. It was a very though game! Abby Wemback scored from the United States and Cynthia Uwak scored from Nigeria.
If you could go back in time, where would you go?
Back to my teenage age years LOL!
Which living person do you most admire, and why?
My Mother because she as always be there for me. In sports international soccer player from Nigerian Mercy Akide-Udoh and Olympian Lionel Messi of Argentina.

What is your favorite food?
Amala with vegetable soup, rice and plantain.
What was the most important piece of advice given to you in your life?
Don't care about what other people say about you! Care about what you are passionate about, have a reason for your actions, and embrace your faith in God.

Posted by George Melichar at 2:50 AM